I have nostalgic reveries about my stint in 2018. Despite my hankering for the “good old glory days” and imploring requests by Common Cause, I had to decline election protection duties.

In my defense, a writing deadline for a chapter in an anthology and a physical injury that required far too many visits to PT got in the way this time.

It’s midterm elections time and “a change in the climate” has much broader meaning in America. We’re off the charts. The regrettable demise of Roe vs. Wade, with potentially tragic consequences, the disastrous war in Ukraine, inflation hype and the survival of the election denial myth, the price of oil – and much more – have all contributed to uncertainty, exaggerated hyperbole, hysteria, increase in hideous acts of violence, and even more radical polarization. Candidates spend no time outlining their policies but instead, run ads sowing seeds of distrust, attacking and accusing their opponents with exaggerated claims. 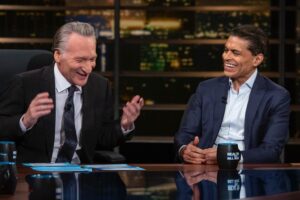 I had the recent serendipitous experience of watching a “thinker,” whose ideas I greatly admire – comedian and political/social critic Bill Maher. The comedian was interviewed by CNN’s Fareed Zakaria, who posed his usual shrewd, penetrating questions – to which Maher provided his usual insightful responses and showed, once again, that he can think out of the box and inspire some new ways of looking at issues.

A couple of current concerns were addressed. The two men expressed their surprise at the evolution (or is it devolving?) of pro-choice and agreed that there’s more intensity of feeling coming from and being expressed by the pro-life side. I can attest to that when I think about all the texts and hate mail I’ve received from pro-lifers. These folks make outrageous, unfounded claims about their opponents.

Maher concluded that we’ve moved from being a socially liberal to a socially conservative society.

With regard to transgender issues, I was reminded of an animated conversation I’d had with a family member about a friend’s grandchildren who’d transitioned.
Maher remarked that “some of this (transgender) stuff is trendy.” He wondered why there would be regional differences in prevalence if it was a biological issue. I was on the same page and, like Maher, had wondered about that question. I would add, I’d thought perhaps some psychological issues might have led to the embrace of the transitioning trends by some. I sensed the other person in my conversation thought I was being intolerant when I made those suggestions.

In my next post, which will be a post-election blog, I’ll reminisce about my election protection experiences and share why I felt so good about it.