My gut is churning and my head feels like someone sat on it. This is my author and coaching website and politics have no place here. Or do they? But I must speak out. After all, that’s what’s written at the top of this page, “Speak from your heart and be heard.”

First: Reading last night that Michael Moore thinks Donald Trump will win, quoted as saying “Here’s how Trump will win election.” (When I took the trouble to probe, it turned out to  be a piece of misrepresented information. A right wing Chelsea Schilling of WND (World Net Daily) who has a history of attacking the LGBT community and other progressive causes, had distorted and omitted the last part of Moore’s film and posted the residuals on her blog.)

Second: Seeing that our watchdog, the FBI, has unearthed more emails tied to the Clinton case.

I certainly have had my reservations about Hillary. Last spring when there was still a chance for Bernie, I wrote:

“And by the way, I’m not ready to transfer my vote to Hillary. At least not until the last dog is hung. After all, why would I be eager to support the dynasty and a candidate who’s indebted and accountable to Goldman Sachs and Wall Street and whose time at the state department raised too many questions? “

But more importantly, I said, “I would transfer my vote only to block either Trump or Cruz, if either holds sway as the GOP nominee.”

Although I would still prefer a candidate who is not tied to the establishment and one with a better track record on many dearly held causes, I ask myself now, who could possibly be worse than Donald Trump? How low can we sink? Nor can we  deny Hillary Clinton’s intelligence, her many accomplishments and her support for social justice.

Regarding the ongoing saga of the emails, I ask, what’s going on in this country? Is everything tied to partisan politics? Why does the witch hunt come back to haunt us? Why now? When there’s a chance it could sink us even lower, into Trumpism? Is the FBI in bed with the right? Or is it plain old garden variety misogyny? 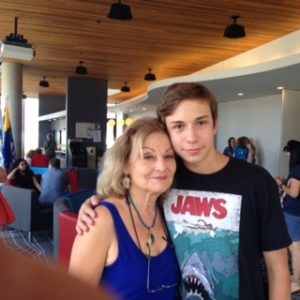 I believe that Donald Trump is the worst possible candidate I’ve seen in mainstream politics-and I’ve seen a few duds in my time. And the most dangerous for our country. I haven’t time to go into the multitude of reasons for my argument. For persuasively argued rationales, I recommend folks like Senator Elizabeth Warren, Michael Moore… and my Vancouver grandson, Sacha (Generation Z), of course.

If the worst happens, see you back in Vancouver, Folks. Come and visit.”