We finally got a chance to see “Hidden Figures,” a film which celebrates the contributions of three black women who played crucial roles in the American Space Program in the sixties. At the time,“racial segregation and discrimination and workplace sexism were widely accepted facts of life.” (A.O. Scott, NY Times). Watching that heartwarming yet frightening film triggered memories of my childhood and teenage years.

I grew up on Capitol Hill in Seattle, before they built the freeways, before the sixties, before I was old enough to know about sexism and Race in America. Back then, I was just busy being a kid. My parents got me my first bike and I learned to ride on our serene neighborhood street. I was six. My father held the back of the saddle and ran along the block with me so I wouldn’t fall over. Hundreds of thousands, if not millions, of speeding vehicles now pass through what was once our quiet street.

Much of my childhood and adolescence felt shrouded in a haze. I didn’t know what was really going on and all of the implications. But I did understand some. I knew that a small number of people of color lived in the city but I rarely saw any of them. My parents scrimped and saved and built their dream house at the far south end of Lake Washington so we could move from the looming freeway into what I would now call a “white bread” neighborhood.

Most of Seattle’s African Americans were relegated to one particular area of the city and, as such, their children attended high school in that area, some distance from where we lived. Black kids looked different and some had a reputation of being tough. If they truly were tough, it would not be surprising, given what they had to endure.

Partly because of ignorance and partly because of some of the stories that drifted my way from my Jewish buddies who also attended that “other, dangerous school,” I felt relieved to not be part of it. After all, I hardly ever saw people who weren’t white. Nor did any of my textbooks or teachers ever acknowledge or celebrate diversity.

The closest I’d ever come to racial bigotry was when a kid in my grade  called me an anti semitic name and my parents blew it off, “oh dear, it happens.”  Mistreatment of African Americans or others of color didn’t have the power to shock or present a call to action, partly because I was removed from it. I, along with many of my friends and students in my part of town, led a sheltered and, yes, privileged life. 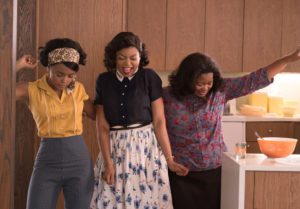 So, when I am called now to revisit those halcyon years of the sixties, see films like Hidden Figures and read books like The Help, I continue to be shocked and dismayed, even horrified, at what was really going on at that time.  As I watched Hidden Figures, my heart went out to Katherine Goble, analytic geometry mathematician and critical team member, when she is denigrated and denied her rightful recognition because of her color. I shivered as the all-white crew of scientists looked up with disdain at Katherine, as she poured herself a cup of coffee from their coffee machine. I cringed at her twenty minute race across the campus at the Langley Center in Virginia to use the toilet designated for black women.

You might wonder if my friends and I had a sense of the racial bigotry in other parts of America besides the northwest, and I would have to answer “a vague sense.” We’d heard occasional racist slurs. But while blacks in Alabama were still scurried to the back of the bus, blacks in Seattle could sit anywhere they chose. And, there were no separate bathrooms or coffee pots for “coloreds” like the ones at Langley.

Hidden Figures raises another important issue of Sexism and subordination of women. When Katherine, was told women don’t go into the important meetings at Langley (despite the fact the team desperately needed her expertise), and when she spoke out forcefully against those rules, on behalf of all women, I thought of my own experience and was reminded of the character of Rachel, in my story, Seduction.

Seduction is based on true events in my life, is also about a woman rising to the challenge of speaking out on her own behalf.  (I don’t call the story a memoir because the “memoir police” might track me down if they thought something in it wasn’t “true.”) The story is about a man, married with kids, who tries to seduce the main character Rachel, following her divorce. To make matters worse, he is married to her friend. How Rachel responds, deals with the challenge, and sheds her passivity to “speak from her heart” and ultimately on behalf of all women, is the stuff of this story.

In my next blog I’ll be posting excerpts from the story so I hope you’ll “stay tuned.”