Creating Character From Our Heart: The Best Of Times To Create Character
by Dr. Kixx Goldman

What’s the most exciting part of your writing process? For me, it’s exploring character!

How could Charles Dickens have known?

But what, you might ask, does this have to do with the topic of Creating Character?

Characters–and their context make up our world. This is where it all begins.

You may have heard me say that studying character and people’s lives are in my DNA. So is storytelling. Those interests led me to psychology, therapy, and writing.

My passion has been working with clients. I help people forgive, heal trauma, resolve conflict, and grow.

In this blog, I’d planned to describe my process of creating characters to you. But I’m saving that for next time. Because there’s a book I need to tell you about, first. It’s shaped my writing if not my life and the way I look at a character.

In the past, I devoted my reading time to professional journals. Having more personal time in recent years, I became re-enchanted with the delights of fiction and decided to find out if I, too, could write.

As I began to write my collection, a favorite book leaped into my consciousness. I ordered a reprint and was inspired all over again. 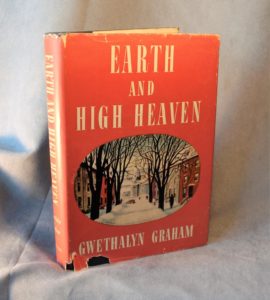 Earth and High Heaven, by Gwethalyn Graham, was written almost eighty years ago, yet it speaks to me today, at a time when we are coming to grips with bigotry and racial injustice.

I was hooked from the opening line of the book, “One of the questions they were sometimes asked was where and how they had met, for Mark Reiser was a Jew, originally from a small town in northern Ontario and …Erica Drake was a Gentile, one of the Westmount (Montreal) Drakes.”  The author uses setting to take a quick dive into the story’s inherently conflictual situation, at the same time giving us a brief hint of the starkly different backgrounds of the two main characters.

Set in Montreal, Quebec during World War II, the two lovers are forced to confront the clash of cultures and “overcome the anti-Semitism of their society.” (Wikipedia)

The book was the first Canadian novel to catapult to the top of the NY Times bestseller list.

As a young woman, I discovered my parents’ tattered copy and was riveted by the two amazing characters who leaped off the page. I fell in love with both Erica and Marc, who must bridge the moat between their different cultures and deal with the prejudices of those around them– including Erica’s father, a fascinating character study, himself.

Little did I dream that, years later, I would be creating characters drawn from my life experience and work with clients. Writing has helped me bring the parts of my brain into harmony and nurture my soul. And solve the puzzles of my small universe.

There is a vitality, a life-force, energy, a quickening that is translated through you into action and because there is only one of you in all of the time, this expression is unique –Martha Graham

Exploring character is the most exciting part of my writing process. Words, images, and emotional insights that have been shaped by my life experiences jump onto the page and characters emerge.

I’ve been thinking a lot about how that happens. In my next blog, I’ll explore, in more detail, ways to write Memorable and Intriguing Characters. For now, let’s take a brief look at one of the important steps in writing memorable characters:

One way is by looking at a person as he or she is revealed through his or her actions. This tells us much about their personality.  “Ned” is an example, He became the narrator in my story, The Promise, in my collection. The soulful and searching eyes from his photo clipping spoke to me and Ned soon found his way onto the blank page.

We learn a lot about Ned through his actions– and his thoughts, in a scene where he’s sitting in front of the fire with his new love, Misty. She has just shared a “growing up” experience with him, where she reveals how she came to be a dancer.

When she turns to Ned and asks him about his childhood, he simply stutters, “Swim team and rowing club in college. Worked my way through an engineering degree…” Ned narrates to the reader and says, “I’d fallen in love with this beautiful woman…I’d have done anything for her. Except talk about my childhood.”

Here we get a character hint from Ned: he is not as open as Misty and, like many of us, has secrets he is reluctant to share. We’ll look more at Ned in next week’s blog, as he does reveal secrets to the reader.

Our characters have a lot to teach us about our lives. Writing and reading about them is enriching.

I would love to hear from you and encourage you to share ideas about Character.